﻿Support “Chase the virus, not the people!” Campaign on “Zero Discrimination” Day!

March 1 – the special day for #Chasethevirusnotpeople campaign team, dedicated to the Zero Discrimination goal. Its support from the campaign and the communities of Eastern Europe and Central Asia (EECA) – an opportunity to show the importance and the need for change, to stand up united for justice and equality for everyone.

Help the campaign “Chase the virus, not the people!” sound louder on the day “ZERO DISCRIMINATION”!

Platforms for promotion and joint communications are social networks: Facebook, Twitter, Instagram — here everyone is able to express an opinion about stigma and discrimination, tell a story and openly declare #ChaseTheVirusNotPeople and #ZeroDiscrimination.

• Disseminate the statement of the campaign and communities of the EECA region in your city, country, send the statement to media, to your colleagues, partners, officials.

• Place the main slogans of the “Zero Discrimination” day in your social networks along with photos, videos, pictures, etc. If you want to declare your support the campaign #chasethevirusnotpeople and #zerodiscrimination, you can use e-mails, posts, tweets, pictures, photos, gifs, audio and video clips.

• Watch and help to disseminate the video message from campaign organizers to communities and activists in the region. We will put video in social networks gradually.

Can you do more? Make your own photo / video, share and participate in the contest in support of the campaign “Chase the virus, not people!” and “Zero discrimination” day.

Use the branded campaign attributes that you have or print out a poster for a photo/video. Post a photo or video with the campaign poster in social networks with hashtags #ZeroDiscrimination and #ChaseTheVirusNotPeople. The winner will be determined randomly using the Random.org service. Only posts with hashtags will take part in the competition (from February 25 to March 05). 5 prizes with the attributes of the campaign “Chase the virus, not people!” will arrive to you in the middle of March! 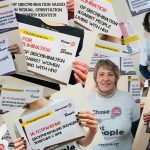 The time has come – 1 March, #ZeroDiscrimination Day! You decide now.News