We did it ? #dreamteam

Partnership campaign of 9 regional networks #chasethevirusnotpeople has been launched successfully:

? During the conference, the pavilion of EECA community networks was visited by over 13.5 thousand activists from all over the world ?;

? At the Global Village opening, plenary sessions and regular sessions, within the framework of special events of #aids2018, speakers from the EECA region spoke about the action, and the hall chanted in response, reverberating the slogan;

? As a sign of support for #chasethevirus and solidarity with EECA communities, the # aids2018 participants from all over the world wore the branded campaign merchandise: T-shirts, handcuffs, stickers, bracelets. And, thanks to this involvement and solidarity, the campaign slogans sounded not only at the events of the conference and Global Village locations, but they were noticeable even on the central squares of the city;

? At the regional location No. 515, 54 events were held ??♀️??♂️, these are sessions, discussions, meetings, workshops, presentations and video presentations about the problems of EECA communities;

? During the traditional #aids2018 MARCH the EECA column was possibly the most numerous and noticeable. Vera Brezhneva also joined the procession, heading the column in a T-shirt with a campaign logo.

Together ✌️ we made the problems of the region visible for the whole world ? – ?? in a constructive ? and persuading manner, without filters.

We turned a page, started a new dialogue with governments, donors and international partners.

We will continue to move only forward, only together ?

We express our special appreciation to everyone who helped in the preparation of the campaign, who supported it and actively participated not only at the conference itself, but also online. 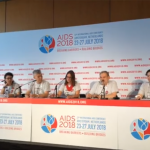 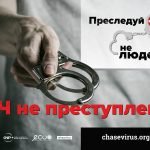