Project goal: in the framework of the events dedicated to World AIDS Day, to convey to people the ideas and calls of the campaign “Chase the virus, not people!” by drawing attention to the problems of key populations, increasing the priority of actions to overcome discrimination and stigmatization of vulnerable communities, as a key condition for an effective response to the HIV epidemic in Azerbaijan. On December 1-4, 2019, in Baku, wide testing, awareness-raising activities were carried out as part of the campaign “Chase the virus, not people!”. The events were held at the University of Foreign Languages ​​and in the central shopping centers of Baku: in the Metropark and Park Bulvar. People were informed about the tolerant attitude towards people with HIV, the problems of stigma and discrimination, and the problems faced by PLHIV. During the events, everyone could take their photo with the hashtag İNSANI YOX VİRUSU TƏQİB ET! (“Chase the virus, not people!”) and post it in social networks, thereby attracting public attention to the problem and contributing to the fight against stigma and discrimination against PLHIV. At the University of Foreign Languages, the organizers of the campaign held lectures on stigma and discrimination and the problems faced by PLHIV, on tolerant attitude towards people with HIV, in which 120 students and teachers took part. Leaflets on the topic of stigma and discrimination (900 pieces) were developed and translated into Azerbaijani, brochures on the theme “myths and reality about HIV” (900 pieces) were published, reflecting such issues as the legal and social protection of rights of people living with HIV. Materials were disseminated at the University, shopping centers, on the streets of the city, as well as during the volunteer blood donation campaign.

Links to information about the national campaign: 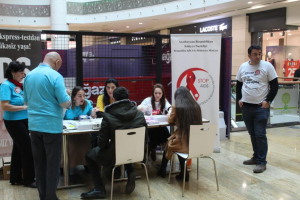 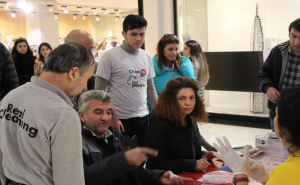 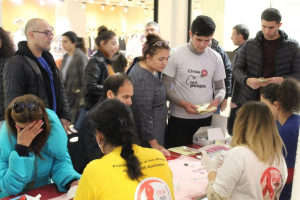