The case of Ekaterina Parfenyuk from the Republic of Belarus

Ekaterina Parfenyuk is a current member of the Country Coordination Mechanism (CCM) of the Republic of Belarus, representing the community of people who inject drugs. Ekaterina lives with HIV and is raising a young child.

The Republican Scientific and Practical Public Health Center for Medical Technologies, Information, Management and Economics (RSPC MT) is the Principal Recipient of Global Fund grant BLR-C-RSPCMT for HIV and TB for the period from January 1, 2019 to December 31, 2021. The amount of the grant is USD15,840,452. Grant implementation began on March 19, 2019.

Tatyana Makarevich is the Head of the Department responsible for managing Global Fund grants at the RSPC MT.

Belarusian Public Association “Positive Movement” is a sub-recipient of Global Fund grant BLR-C-RSPCMT, responsible for the component concerning HIV prevention among people who inject drugs and their partners.

In late May 2019, Ekaterina Parfenyuk sent an internal request to the Principal Recipient’s representative asking for information to be provided on a number of issues concerning implementation of the current program. In particular information was requested concerning materials and drugs being procured to treat HIV (ART), tuberculosis, and for the provision of opioid substitution therapy (methadone and buprenorphine), together with the expected terms of delivery of such drugs and materials and any risk of interruption in their supply. Her concerns were related to the implementation of the Global Fund grant commencing much later than initially planned on March 19, 2019 instead of January 1, 2019.

Following correspondence between Tatyana Makarevich, a representative of the Principal Recipient, and CCM members, Ms. Parfenyuk had questions which, in her opinion, were still unanswered, including the date when the drugs will become available to patients. Ms. Makarevich informed Ms. Parfenyuk that some questions raised by CCM members and their alternates in the course of correspondence could be better addressed by the Ministry of Health of the Republic of Belarus as the more competent body.

Consequently, on June 7, 2019, Ms. Parfenyuk sent an official request through the internet portal of the Ministry of Health of the Republic of Belarus asking for all the relevant information to be provided to her.

At the same time, Ms. Parfenyuk published on the Facebook page that she administers called ‘Belarus. Harm reduction works – fund it’ an open letter to the Global Fund, the Ministry of Health and the UNAIDS Country Office in the Republic of Belarus making a similar request.

In particular, in her letter, Ms. Parfenyuk requested, “data on the names of drugs and the terms of their delivery to health institutions and service delivery sites within the grant provided by the the Global Fund to Fight AIDS, Tuberculosis and Malaria concerning:

It was pointed out in the letter that the, “Situation with medical drug supply is becoming critical: there are interruptions in the supply of the TB drug ’Bedaquiline’ which patients are unable to receive.”

After the open letter was published on Facebook, a discussion took place concerning its content in the comments to the post. The main participants of these discussions included Ekaterina Parfenyuk and representatives of the RSPC MT, including Tatyana Makarevich. In the course of the discussions, Ms. Makarevich asked Ms. Parfenyuk to provide evidence upon which she had made the conclusion that there is a shortage of medical drugs supplied within the grant, noting that if such evidence was not provided then relevant law enforcement bodies would be contacted to protect the honor and dignity, as well as the business reputation, of RSPC MT. Ms. Parfenyuk replied that she received such information about drug stock-outs from patients and that she cannot disclose their identities as such information is confidential.

To read the full text of the open letter and content of the discussion in response to the post (in Russian), please follow the following link:

In response to the request of Ms. Parfenyuk submitted through the Internet portal of the Ministry of Health, a letter was received dated June 12, 2019, No. 4-5-1/P-4736 entitled, “On the request submission”, and signed by the Deputy Minister of Health V.D. Shylo, in which the RSPC MT was instructed to review the essence of the request and to respond to the sender’s questions within the competence of the institution and within the terms stipulated by current legislation. The response was given in violation of the terms of the ’Law on Appeals of Citizens and Legal Entities’ 2.5 months later. The letter (No. 22-04 / 131) sent to Ms. Parfenyuk by RSPC MT on behalf of the Ministry of Health was dated August 29, 2019 (according to the postmark on the envelope, despite the document inside the envelope being dated July 10, 2019). At the time of sending the letter, the court had already passed a guilty verdict on the lawsuit brought by RTSC MT against Ms. Parfenyuk.

On July 22, 2019, the Economic Court of Minsk started proceedings based on a legal claim made by the Republican Scientific and Practical Public Health Center for Medical Technologies, Information, Management and Economics against the Belarusian Public Association “Positive Movement” and the individual, E. Parfenyuk, concerning the protection of the business reputation and refuting the defamatory information related to its business reputation. The claim against the Belarusian Public Association “Positive Movement” was filed by RSPC MT because RSPC MT assumed that this organization had created, and was administering, the Facebook page where Ms. Parfenyuk had published her open letter. Furthermore, in the course of the preliminary court hearings, RSPC MT dropped the claim against the Belarusian Public Association “Positive Movement” as the organization provided incontrovertible evidence that it neither owns, nor administers, such a Facebook page.

On July 29, 2019, Ekaterina Parfenyuk and the Belarusian Public Association “Positive Movement” sent letters to RSPC MT offering reconciliation and a pre-trial settlement of the dispute. However, RSPC MT failed to accept the offer.

According to the legal claim, RSPC MT considered that the phrase contained in Ms. Parfenyuk’s open letter, namely, the “Situation with medical drug supply is becoming critical: there are interruptions in the supply of the TB drug ‘Bedaquiline’, which patients are unable to receive”, is reprehensible, defamatory and causing reputational damage to the RPTC MT. In addition, it considers that the distribution of such information may lead to the RPTC MT “losing its reputational assets to further submit its proposals within the procedure to select the principal recipient of the Global Fund for HIV and TB.”

On August 2, 2019, the Economic Court of Minsk delivered its judgment on this case in favor of RPTC MT. According to the judgment, Ms. Parfenyuk has to:

After the first trial, Ms. Parfenyuk filed an appeal which was accepted for consideration. The court of the second instance was held on September 5, 2019, and upheld the conviction of Ms. Parfenyuk. Now Ms. Parfenyuk is preparing an appeal to the supreme judicial authority, the Supreme Court of the Republic of Belarus.

RSPC MT, as the complainant, has the right to withdraw its claims against Ms. Parfenyuk at the stage of the upcoming court hearing at the Supreme Court.

Currently, Ms. Parfenyuk and her 18-month child are staying in Tbilisi (Georgia) within the program to protect the rights of activists of the Human Rights House Foundation. Her stay in Tbilisi is, inter alia, related to the fact that she is concerned about potential future actions by the RPTC MT against her in the territory of the Republic of Belarus. Due to the court proceedings, Ms. Parfenyuk has had an emotional and mental breakdown and has been prescribed therapy owing to her psycho-emotional status.

TERMS OF REFERENCE For Development of CHASE THE VIRUS, NOT PEOPLE! National CampaignsNews 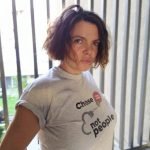 Open letter to support the case of Yekaterina ParfenyukNews